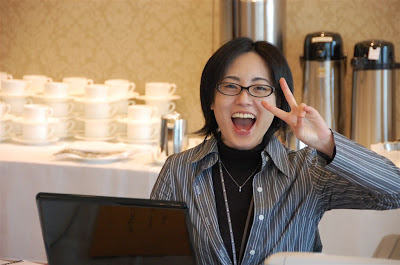 Ryoko in Executive Program in Vancouver
It’s been almost three years since we first met Ryoko Morita. Of the 50 candidates we interviewed that day, she was our favourite. After completing three stages of interviews she was eventually hired. She was by far the most confident and capable person in this group of interviewees and her talent and dedication proved to be a great fit for Lean Sensei.

But as is often true of many bright, talented people, she had a long term plan. She would be happy to join our team as long as we understood that her plan was to return to her home country, after three years in Canada. With a fiancé (actually boyfriend at the time) eagerly awaiting her return, and her heart still attached to the beautiful country of Japan, it was understandable that we would part ways at some point. At the time, we didn’t think too much about it - three years seem like an eternity.

Ryoko in Singapore Executive Program
Well, three years have passed. The time has arrived for Ryoko to move on to a new chapter in her life in Japan. With her fiancé, Hidetaka, now anxious for her return, Ryoko will soon be thinking about her upcoming marriage and a new career.

Ryoko with her fiance, Hideki
As we reflect on her time with us, we are glad for the opportunity to have worked with Ryoko for the last few years. Lean Sensei is better for having known her and worked with her. She has been an integral part of our team and we have shared many good times together.

Ryoko and LSI team
We will all miss Ryoko but we also know that this is a defining moment in her life, and we are excited for her. A whole new future lies ahead and it will be a fulfilling one as she reconnects with old friends, makes new ones and embraces the many exciting opportunities ahead of her.

At LSI Japan Lean Program
So it is with bittersweetness that we say farewell – but not good bye - to Ryoko because we know that our paths will cross again in the near future. As she prepares for her last day on March 26, 2010, we want to send her on with our warmest and best wishes. She certainly deserves the best.

Her friends at LSI
The only regret I have is that I wished we could have somehow convinced her fiancé to move to Canada!

Thank you Ryoko for the wonderful memories and for your contribution to LSI. You’ve blessed our lives and we are richer because of your time with us.

David and Hilda
Posted by Lean Sensei at 1:40 AM