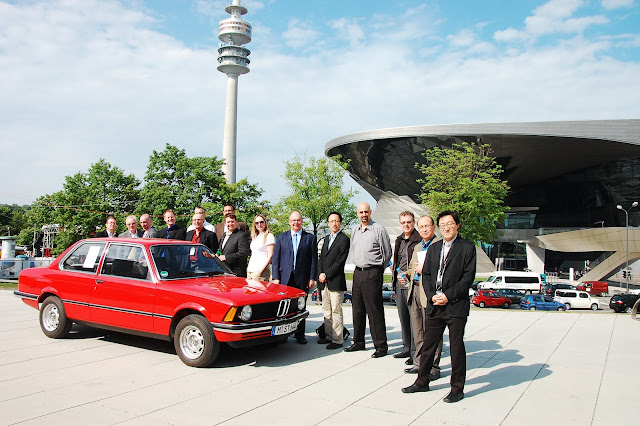 We began our day at the German landmark building BMW Museum, followed by a brief spin through BMW World where they highlight their current and future technology. As the landmark museum is historically important, the recent renovation challenged architect Karl Schweitzer because he could not change the exterior walls.

The museum had displays of BMW's most famous product and technologies. Everything from their first products, the 1917 3A airplane engine, 1926 R32 motorcycle (with still being used today shaft drive), right up to the Andy Warhol painted 1979 M1 Gruppe were available for us to see and enjoy. This car was part of 17 art cars that were shown for the very first time in history!

Then we went to visit the BMW factory. Built in 1922, the factory is in the midst of a renovation, still operating, but clearly under construction.
Engine assembly area had new line in the midst of being installed - it will produce inline 4, V6, V8, V12 for Rolls Royce Phantom.

This factory produces engines for BMW plants around the world. It’s the only BMW plant that produces both engines and cars under the same roof.

The new inline 4 will replace the inline 6, produce the same BHP, with 15% less fuel, and 50 less kg.  A new stamping show was also being constructed. It will add 50% capacity while using 15% less power. The press shop stamps 20 types of steel 24 hours per day producing 100,000 parts per day.

It's rare to tour a painting area, so we were lucky to be able to see this special process. Water based paint is used…the newer formulations weight has been reduced by four kg: from 12 to 8 kg worth of paint in each car. 450 liters of water is used to paint each car.
It was interesting to see the robot paint the car, open the door, paint the inside, and then close the door!

Next up, Lambhorgini and Ducati....

Thanks to Master Blackbelts Kevin Wack and his team for this contribution
Posted by Lean Sensei at 3:33 PM