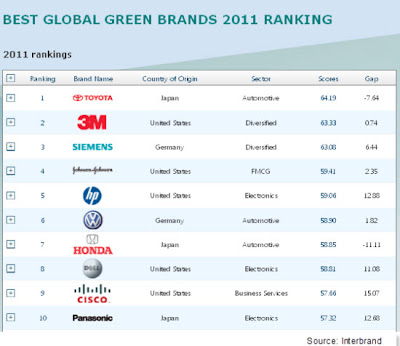 Toyota, 3M and Siemens have come out on top of a ranking of the best green brands by consultancy Interbrand.

The companies named in Best Global Green Brands 2011 have a global presence and a demonstrated record of delivering value to stakeholders, Interbrand says.

The consultancy largely attributes Toyota’s top ranking to the success of the Prius hybrid. Interbrand describes the Prius as ”iconic,” saying it has “become synonymous with hybrid vehicle."

The Japanese carmaker was also praised for its 2010 partnership with electric sportscar manufacturer Tesla and its 1992 adoption of the “Toyota Earth Charter”. These achievements coupled with it reductions in greenhouse gas emissions from its transportation and logistics fleet brought Toyota out on top, Interbrand says.

3M and Siemens, ranked second and third, were praised for their early, 1975 adoption of an environmental policy and green buildings program, respectively.

But a number of brands show large gaps between performance and perception, Interbrand said. L’Oréal, Nokia, and HSBC all scored significantly higher in performance than perception, suggesting that while they are doing great things internally in terms of environmental sustainability, they are not yet communicating those efforts to consumers as clearly as they could.

“As corporate citizenship increasingly becomes the norm, green initiatives may be among the most visible and easiest to claim and yet, can be the most challenging to deliver performance against,” said Jez Frampton, global chief executive officer at Interbrand. “We believe the strongest green brands lie at the intersection of performance and perception: their ability to build stronger connections with consumers as a result of actionable and credible environmental practices.”

URL to article: http://www.environmentalleader.com/2011/07/27/toyota-tops-global-green-brands-ranking/
Posted by Lean Sensei at 12:46 AM