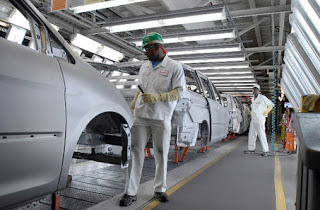 4.4 billion pounds of waste eliminated in 10 years
Source: Honda Press
Honda announced today that it has achieved one of the most important targets in the company's longstanding "Green Factory" initiative in North America: zero-waste-to-landfill. Ten of 14 Honda manufacturing plants in North America are now operating with zero waste to landfill, while the remaining four plants are functioning with "virtually zero" waste to landfill.
Honda Manufacturing of Alabama, in Lincoln, Ala., became the first zero-waste-to-landfill auto plant in North America at the outset of production in 2001, setting off an industry-leading trend within the company. Honda Manufacturing of Indiana, in Greensburg, Ind., also started production as a zero-waste-to-landfill plant in 2008.
Waste sent to landfills has been dramatically reduced at Honda auto plants throughout North America—from 62.8 pounds of industrial waste to landfills for every automobile produced in the fiscal year ended March 31, 2001(FY2001), to an estimated 1.8 pounds per automobile in the current fiscal year 2012. Among all of its 14 plants in North America, Honda now sends less than one-half of 1 percent of all operating waste to landfills. Remaining waste product is either recycled or used for energy recovery.
"This is an important achievement and a tremendous reflection on the commitment and continuous effort of Honda associates throughout our company over the past 10 years to reduce waste from Honda's production operations," said Karen Heyob, manager at Honda of America, Mfg, Inc., who is responsible for Honda's green factory initiatives in North America. "This is an even more significant achievement when you consider that we also produce in North America the engines and transmissions that power our products."

Since the establishment of zero-waste-to-landfill production in its Alabama plant in 2001, Honda has undertaken a major initiative at plants throughout the region to eliminate landfill waste. To understand what comprised each plant's landfill waste, Honda associates went "Dumpster diving," looking at the composition of the waste material resulting from all of its production activities.
On the basis of these findings and subsequent investigations, Honda associates at all 14 plants in North America have identified and implemented hundreds of waste-reduction and waste-recycling initiatives. These initiatives run the gamut, from the reduction of offal (metal scrap) in stamping processes, to improved parts packaging for ease of recycling, to the minimization of paper and plastic waste from cafeterias. As a result of these efforts over the past 10 years, the company has prevented an estimated 4.4 billion pounds of waste material from being sent to landfills, which is equivalent to the amount of household waste produced by 2.8 million Americans, roughly the population of Chicago, in a single year.

Many of the waste-reduction and recycling activities were undertaken through Honda's associate involvement programs, including its "NH Circle" quality circles, where teams of associates throughout the company engage in an annual competition to improve Honda's value to its customers and society, with a strong focus on efficiency, cost and waste reduction.
"There are hundreds of stories of associate innovation and challenging spirit that add up to this significant advancement in our commitment to more environmentally responsible manufacturing," added Heyob. "And while it is an important milestone, it is not the end of the race for Honda, as we continue to work to eliminate waste, improve energy efficiency and reduce the total environmental footprint of producing Honda products in North America."
Examples of Honda associates' waste reduction initiatives include:
Engine plants in Ohio, Alabama and Canada are reusing virtually all leftover sand from aluminum and ferrous metal casting operations. In FY2010, the three plants recycled a total of 9,400 tons of sand, which is used as mulch and landscaping material, and in concrete products.
No steel scrap from North American manufacturing operations has been going to landfills. In one example of Honda's effort to reduce steel scrap, in FY2009, the Marysville Auto Plant initiated a program to reduce the amount of offal by reducing the size of steel sheets used to stamp new body parts. The program, which significantly reduces the environmental impact of transporting and recycling the steel, is now being adopted by other Honda factories in North America including the Canada, Indiana and East Liberty, Ohio, auto plants, and is being considered by other Honda plants around the world.
In FY2008, Honda Power Equipment in Swepsonville, N.C., initiated a closed-loop system for recycling aluminum scrap from the machining trimming process, melting the scrap into ingots that are recycled into die-cast operations.
The East Liberty, Ohio, auto plant built a recycling bin for bolts, other unused fasteners and parts packaging, enabling the factory to recycle more than 22 tons of steel each year.
Within the past year, all four Honda plants in Ohio completed their initiative to eliminate more than 500 metric tons of cafeteria waste produced annually. The plants joined with other Honda plants in North America in transitioning to washable dishware and to disposing of solid waste through composting, recycling and energy recovery.
The Timmonsville, S.C., powersports plant, which produces all-terrain vehicles, recycles hard plastic foam, sheet plastic foam and other recyclable plastics from incoming parts shipments, diverting more than 130 tons of plastic from landfills each year.
The Marysville and East Liberty, Ohio, plants also recently began washing and reusing thousands of plastic caps each day that are used to protect parts during shipping.
The only two remaining landfill waste streams in all of Honda's North American production activities are: (1) paper, plastic and food waste from associate break rooms and cafeterias at Honda's Mexico automobile and motorcycle plants, where there exists no more environmentally responsible means of disposal; and (2) a byproduct of the paint pretreatment process for aluminum body panels at both the East Liberty and Marysville, Ohio, auto plants, which, due to EPA regulations, is non-recyclable. Honda is working with the EPA to identify an alternative means of disposal.
About Honda's Environmental Initiatives
Honda is a leader in the development of leading-edge technologies to improve fuel efficiency and reduce CO2 emissions, including vehicles powered by advanced gasoline engines and natural gas-powered engines, as well as gasoline-electric hybrid, battery-electric and hydrogen fuel cell-electric vehicles. In 2010, Honda was named America's "Greenest Automaker" for the fifth consecutive time by the Union of Concerned Scientists. The award is earned by the company with the lowest combined score of its smog-forming and greenhouse gas emissions (primarily CO2) in its U.S. automobile fleet. Further, Honda earned the #1 ranking on the American Council for an Energy Efficient Economy list of the "Greenest Vehicles" for the 11th year in a row in 2011.

In addition to its ongoing efforts to improve the environmental performance of its products, Honda has worked to reduce the environmental footprint of its manufacturing operations in North America, where the company has the capacity to produce more than three million Honda and Acura products each year, which are comprised of automobiles (including engines and transmissions), all-terrain vehicles, general-purpose engines and power equipment products. These "Green Factory" initiatives include efforts to increase energy efficiency, reduce emissions and waste, and enhance recycling activity.
Through its "Green Purchasing" program, Honda also encourages and supports activities by its more than 600 North American OEM parts and material suppliers to adopt green factory programs.
Posted by Lean Sensei at 7:54 AM