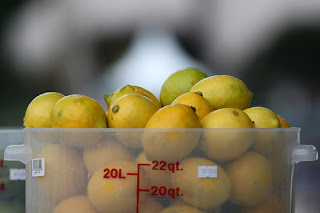 “We create our own experience,” says Rao, who taught “Creativity and Personal Mastery,” one of the most sought after courses at Columbia Business School.
He believes that the single biggest obstacle to workplace happiness is the belief that we are prisoners of circumstance, powerless before the things that happen to us. To change your job, he says, you must change the way you think about it.
Rather than encourage people to focus on “positive thinking,” Rao wants to banish the whole notion of good and bad events. “‘When life gives you a lemon, make lemonade’ assumes that you have been given a lemon and that a lemon is bad for you,” he says. “I’m saying, first of all, if you’ve been given a lemon, is that a bad thing? You can train yourself to say, ‘OK, this happened,’ rather than label it as bad.” If you think of events that occurred 10 years ago and seemed bad at the time, he says, you’ll realize that many of those events led to something positive.
Rao believes that in order to be happy in the workplace, you need to move from personal ambition to “greater vision” ambition. “Personal ambition is ‘I want to be CEO,’” he says. “Greater vision ambition is, ‘I want to lead this company so that people want to work here.’” He says that ambition hinders happiness as long as people employ an “if/then” model: If I get the promotion, then I will be happy. Rao says that a healthier and happier perspective is to think “I have a grand vision and I will try my best to make it work. If I succeed, wonderful. If not, wonderful. My purpose is to give it the best I’ve got.’”
“You should make a change from the place of being grateful for your experience but ready to make a change and continue to grow.”
Even in corporate America, where so much of work is every man for him or herself, Rao advocates inhabiting an “other-centered universe.” If the nice guy gets passed over for a promotion, he still may succeed in less tangible ways or land an even better job down the road. “They may rise later in the shootout,” says Rao. “I’m challenging the assumption that you need to be a dog-eat-dog person to survive in a corporate environment.”

Credit: Forbes
Click here for full article
Posted by Lean Sensei at 10:18 AM